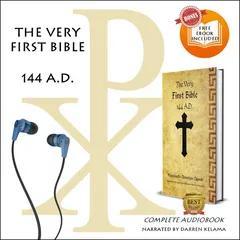 The Gospel of the Lord

The only station in the world dedicated to the uninterrupted and continuous broadcasting of The Gospel of the Lord.

Also called the Evangelion, it is the revelation received by the Apostle Paul on the road to Damascus in 34 A.D. and formed the bedrock of faith for millions of the first Christians.

It has remained unchanged and unedited since 144 A.D. when it formed the cornerstone of canon for the first Christian bible in that same year. Learn more at TheVeryFirstBible.org

Narrated by Darren Kelama, award-winning host of the First Bible Network. To acquire a copy of the unabridged audiobook visit theveryfirstbible.org/audiobook.html

Ready to reconnect with Pre-Nicene Christianity?

You're taking the first step.